THIS BOY IS SO PRECIOUS.

One of my dear friends just posted this video on my Facebook a few hours ago. It is of a Mongolian boy on China's Got Talent who lost his mother and father. He in turn sings this beautiful song that he sings whenever he misses his mother.

THIS BOY IS SO PRECIOUS. My heart was breaking as I watched this. Not only is this child cute, but his story is touching and his singing has such a powerful and deep feel to it. This boy is spectacular and I wish that I could adopt him. I have already established it: I love this child.
Posted by Emii at 9:29 PM No comments:

Does anyone in this anime actually wear pants?

The answer is pretty much no. (Unless you are a man.) But in other words, I am sorry I have neglected this blog lately. I have been trying to catch up on my anime. But, I can happily say that I completed this anime and I adored it~I mean, normally a bunch of cute girls with guns is very clichée...but in this case I could not stop watching Strike Witches.

To start off, this anime is a good combination of WWII, multiple countries (for all you Hetalia fans), aliens, animal ears, pantsu, ecchi, moe, and guns. Pretty much everything that a fan could dream about, haha. However, despite its very popular themes, this anime actually made for a very good story.

This anime takes place between 1944 and 1945 and it centers around these creatures that have invaded the Earth. They are called "Neuroi" and it is the "witches" job to eliminate them. These "witches" are simply girls who happen to possess some sort of magical power. (In some cases it is healing, super strength, etc.) They use these devices called "striker units" to fly and defeat these Neuroi with guns.

The story starts with a young Japanese girl named Yoshika Miyafuji, who happens to be a middle school student. She one day receives a letter from her father. (who was presumed dead and the inventor of the striker units) After receiving this letter, she feels obligated to leave with a military ship and head off to Britania to see if she can find out more.

Initially, Yoshika is very anti-war and refuses to fight against the neuroi but offers her assistance in any other way. (Such as cleaning and cooking for everyone.) However, she soon realizes that she wants to protect everyone and joins the 501st Joint Fighter Wing in the military. (Also known as the "Strike Witches") Here, she is sent to train (but continue cooking and cleaning duties) to become a better witch and harness her magical powers.

The funny thing about the witches is that they are all young girls. Although you can still maintain magical powers when you are older, they tend to weaken and make you unfit for battle. Something such as this actually causes a lot of controversy in the anime. For instance, when you start to become an adult, your witch powers have already reached their peak. So imagine this, the anime already contained all of these other elements...but now you have a bunch of young girls running around between the ages of about 13 to 20.

And not to sound like a pervert, but I kid you not when I say this. I made this face the entire time:

There is soooo much 'dat ass in this anime. So, I am guessing the artist must REALLY love to draw butts.

But on a different note: Strike witches is actually a very good series. The plot is good, the ending is very sweet, there is some humor in there as well as suspense and drama, and I would recommend it to anyone who is willing to deal with so many butt shots....which I am sure many will.

The only thing that irritates me is that the movie wont be coming out until 2012.

Wow I need to check my anime more often.

It turns out that Ore no is now doing more episodes. I really should check to see what is updating more often. 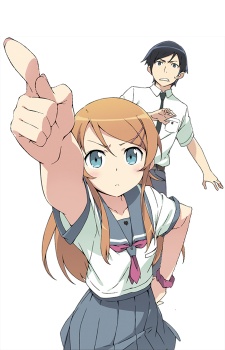 Well, looks like there are three more episodes I need to watch.
Posted by Emii at 8:30 PM No comments:

One of my friends just posted this on her Facebook

Sorry I keep refraining from anime/game/manga themed posts. It's just that I keep coming across things that concern me that need to be addressed.


Also: This blog post is biased. I am a cat lover and of course will take the side against this woman. I am sorry if you differ in my opinion, but there is no use fighting about opinions over the internet so I wish to not see hate mail.

Unless you have not already guessed, I am a cat lover and I treat my cats the best I can and they are like family. If one of my cats sneezes, I tell them "bless you", if I see my cat gagging, I will take them over to the toilet and pat their back until they vomit or feel better. They only give me love in return and they snuggle with me all the time.


This being so, I don't know how people can do things such as this: My Dearest cat Pinkeltje

A friend of my posted this to her Facebook wall, commenting as to how disgusting this was and I couldn't agree more. How can someone do this to their poor pet?

It's one thing if the cat passed away considering that people shave their cats and will have bags made out of their cat's fur as a sort of momento of their beloved pet.

But the problem here is that this woman, TINKEBELL actually KILLED her cat. She killed it by her own hands because the cat supposedly had depression and couldn't stay by itself. This being so, her solution was to murder her cat and turn it into a hand bag to take with her wherever she went.

In my opinion, that is absolutely sick.

This being so, people sent her tons of hate messages between 2004-2008 mainly regarding what she did to her pet cat that she later turned into a book: Dearest TINKEBELL

How can she possibly live with herself? 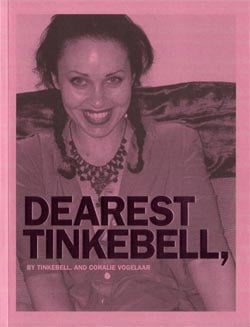 WHY WAS I NOT TOLD ABOUT THIS?!

There are new Kampfer episodes.

Don't worry, I am getting on watching them right now.

EDIT: So I watched up to date on the episodes of Kampfer's second season: Fur Die Liebe and my main comment is: This show is finally becoming the yuri it was supposed to be. For instance, just in the first episode of the new season I was all, "WOAH WOAH WOAH WOAH WOAH."

Either way, things are getting a lot more spicy in this season. Sure is going to be interesting.

So I just recently finished making a cake with my friend. Guess what it looks like? 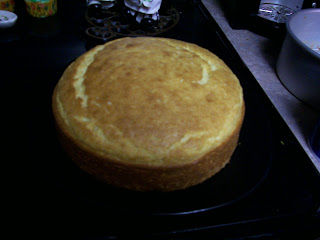 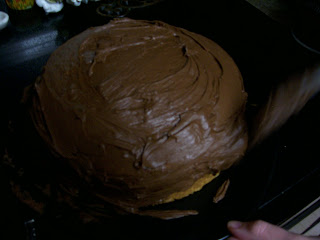 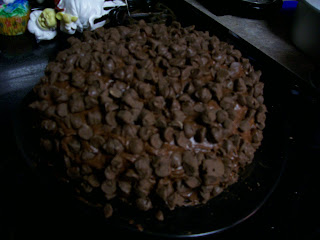 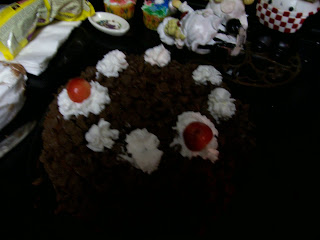 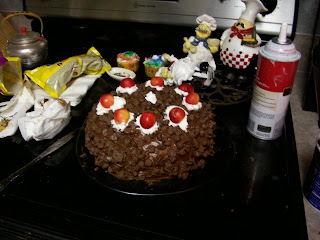 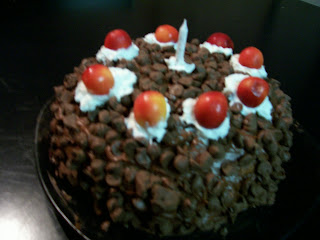 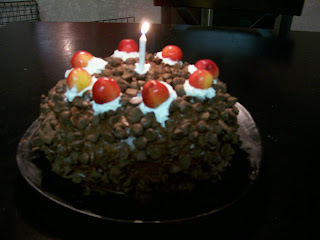 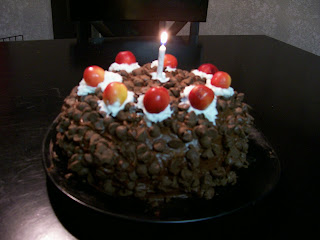 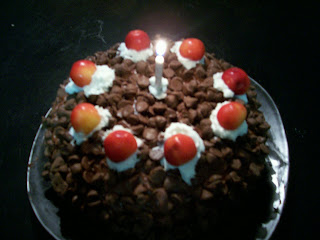 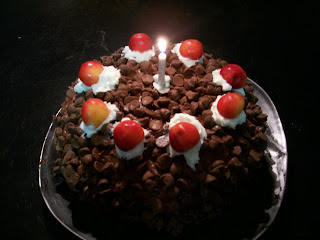 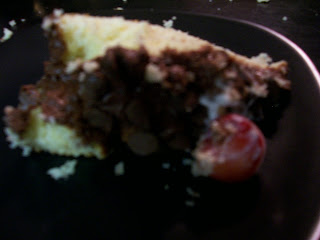 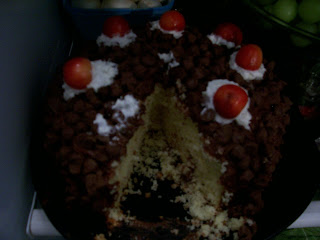 AWW YEA. We really did make the cake from Portal and it was amazing.

Have a nice evening everyone.
Posted by Emii at 9:52 PM No comments:

I know this strays from the norm, but this is an issue and a cause that I really support.

So about 2 months ago or so, my cat was diagnosed with Feline Diabetes. Her blood sugar levels were at
435 (Which for felines, blood sugar is supposed to be at 150 if it wants to be alright without the use of insulin.) Originally, she was placed on this food that is supposed to lower her blood sugar, and it worked for about two or three weeks. The only problem is, her blood sugar kept spiking between meal and now she is on insulin that we have to give to her twice a day.

Doing this really cuts into any plans that my family tries to make because we have to center our lives around delivering my cat her insulin at the same time everyday. But what can you do? Our cat depends on it to live.

And of course, the insulin and the special food make her have diarrhea from time to time, and she pees a river and all of it stinks far worse than before so we are dumping the litter box every two to three days because it gets so bad. We also have to fork out money for $65 bottles of insulin and $42 bags of cat food for her, but you can only get these things through the vet. Again, what can you do? My cat relies on us to keep her alive.

This site helps to educate you in the issue of Feline Diabetes and takes donations in order to help the effort to help your feline's heath.

It is this reason that I ask you to donate something, even a dollar, to help with the effort of cat's health.

My aunt had a cat with Feline Diabetes once. It was when she was moving, she had not had a chance to check his blood levels for about a month. It was then one day where she walked into the house and he was laying dead on the floor from a blood sugar spike. She was heartbroken by this because her cat was like her family, he had been there for so many years of her life. Please help to prevent something like this from happening again.
Posted by Emii at 8:56 AM No comments:

Just some cuteness because I love this game. Sites that make my day